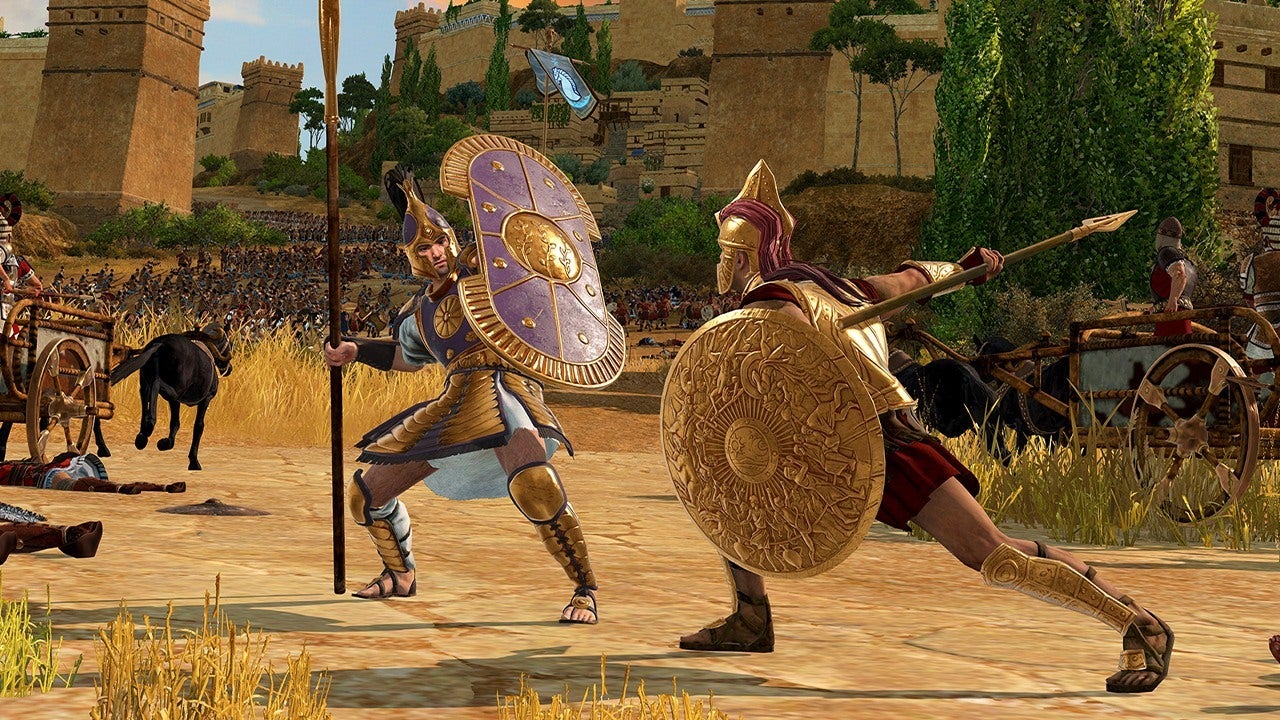 The sun rises over the hills and plains that slope down to the sea from the storied city of Troy, and my Achaean army under notoriously moody gym rat Achilles stands poised to face off with his hard-headed rival, Hector. The first thing I notice is what’s missing from this scene. For one thing, cavalry – with one exception, but we’ll get to that. Creative Assembly’s new Sofia, Bulgaria studio has sought to faithfully represent the warfare of the Bronze Age Aegean, the furthest back in time the series has ever gone. And when you go back that far, even some things we take for granted in Total War – like mounted warriors – were rare.The piece of this new saga I got to check out was specifically showing off the real time battles, so that’s mostly what I’ll focus on. Not much has been revealed about the campaign so far.

This Total War Saga Gets You on Your Feet

Warfare in the age many historians believe the legendary Trojan War took place was heavily infantry-focused. You’d find horses on the battlefield as beasts of burden or driving chariots, but even the latter were mostly used for transportation, scouting, and communication more than getting involved directly in combat. So even compared to other Total War games that portray a fairly narrow set of cultures, like Shogun 2 or Three Kingdoms, your options for plausible units to include are restricted.

But Homer’s Iliad, the version of the Trojan War most of us are familiar with and a major inspiration for A Total War Saga: Troy, is filled with all kinds of gods and monsters and other mythological madness. I went in half expecting to see pegasus-mounted heroes, giants and gorgons, and maybe a cyclops or two. But this definitely isn’t the fantasy battle royale of Total War: Warhammer. There are some powerful “mythic” units to be recruited, but the devs have chosen to take a “truth behind the myth” approach and present them as things that could have somewhat plausibly existed and inspired the later myths.

Hector employed the services of a minotaur in the battle I played, but this wasn’t a labyrinth-dwelling man-beast. Rather, he’s an absurdly tall and buff bandit king who wears a bull’s skull into battle to intimidate his foes and evoke his Minoan heritage. I mentioned that cavalry aren’t a regular tool in your roster, but Achilles got to field a unit of centaurs – which are basically primitive horsemen, appearing to be as one with their steeds and hailing from a nomadic culture that was ahead of the curve on the whole cavalry thing.

Myth Me With That

These “mythic” units may be grounded in reality, but they are still very powerful. The minotaur was able to easily hold his own against an entire unit of regular troops, charging into the fray like a berserker. Likewise heroes like Achilles are paragons of martial skill with a Rage meter that builds as they spend time in combat and can be used to activate powerful abilities. CA Sofia says they’ll mostly be useful fighting on the front lines alongside your other troops, though, and can quickly get into trouble trying to accomplish objectives on their own. They’re potent, but not as single-handedly powerful as an experienced lord or hero in Total War: Warhammer or Total War: Three Kingdoms.

Even with heroes and mythic units sprinkled in to spice things up, there’s still the issue of how to keep the core rosters interesting and distinct when almost everyone is some variation of Dude With A Pointy Stick And Maybe A Shield. The devs are very aware of this issue, and have created a three-tiered system of infantry to keep things interesting. Light units are the fastest, and largely replace cavalry in a flanking and harassing role. Heavy units have very low mobility, but are unparalleled in a head-to-head fight. Medium units exist somewhere in the middle.

Troy’s battlefields also feature mud, which will slow down heavier units but allow lighter ones to pass mostly unhindered.

Hector’s Trojan army and Achilles’ Achaean one illustrate two opposing philosophies within this system. Hector has lots of durable, heavy infantry units including a small cadre of elite troops that take no morale or combat penalties for being flanked or surrounded. If they can get dug in on favorable terrain, they’re very difficult to dislodge. Achilles brings a much more mobile, aggressive force including swift-footed skirmishers who can get in, toss a salvo of javelins, and get out before Hector’s heavier units can respond. Terrain is also key here. Hills and forests have long been a part of the tactical landscape in Total War, but Troy’s battlefields also feature mud, which will slow down heavier units but allow lighter ones to pass mostly unhindered, and sand, which slows down everyone to some degree.

The unit diversity is impressive even in this one battle considering all the restrictions discussed above. With three weight classes, and variation within those classes between melee and missile specialists, some more offense-focused, some more defense-focused, and some trading raw stats for versatility, you’re definitely not going to be looking at two identical lines of spearmen scrapping all the time. Some units can also switch weapon types, such as going from spear to sword, or stashing their shields to use their spears two-handed and deal more damage.

When two heroes meet, they have the option of engaging in an impressively choreographed duel similar to Three Kingdoms. These challenges are triggered by a character ability and last for a set amount of time, rather than until one side is killed or retreats. Duel animations are satisfyingly kinetic and cinematic, with daring leaps and stoic shield blocks. Since they’re not necessarily to the death, one combatant usually came out ahead, leaving the other wounded but alive to fight another day. Which is appropriate. It’s a very long poem.

The eight playable factions each have a “Homeric victory” condition that leads them down the path they followed in the Iliad.

Speaking of said poem, how much will we be forced to follow it? The Iliad largely focuses on the Siege of Troy, which isn’t how Total War normally does things. How can you make a conflict over one city last as long as a full campaign? Well, the answer is that you can pay as much attention to the classic story as you feel like. The eight playable factions (four Greek and four Trojan) each have a “Homeric victory” condition that leads them down the path they followed in the Iliad. But if you want a more traditional Total War experience, there’s also a conquest victory which bids you to control a certain amount of territory. While we didn’t get to see much of the campaign map, I was told that it will be “on par with [Total War: Warhammer 2’s] Mortal Empires” in terms of the number of conquerable regions. Divided roughly between Greek and Anatolian cultural spheres, it spans all of Greece proper, the coastal parts of Anatolia, and as far south as the island of Crete.

And you’ll run into much more than just the eight major factions. The playable Achaean Greeks will have to deal with the neighboring Ionians (including Athens), Aeolians, and Dorians, united under the general Greek “family” but each with some cultural distinctiveness. Likewise the Trojans will be only one of four tribal groupings found on the Anatolian side of the map. There will be more than 100 distinct factions in total, so while the scope might be smaller than some other Total Wars, the scale certainly won’t be.

The personalities of each legendary hero will be felt in their campaign as well. Achilles’ aforementioned moodiness will lead his faction to be somewhat at his emotional whims. Some turns, he might be fired up and ready to kick some ass, granting bonuses. Others, he might slip into a funk and diminish your momentum. It’s hard being so buff and so destined for greatness. Sometimes you have to just lay in the white sand and listen to your “Feelin’ Blue” playlist on Spotify before you can get back to running hundreds of enemy combatants through with a spear.

There will be more than 100 distinct factions in total.

Where are the gods in all of this? While CA Sofia is trying to avoid overtly supernatural interventions, the ancient Greeks definitely believed their deities had a hand in deciding the course of wars. As such, it will be possible to curry Divine Favor with specific deities by building temples to them and giving them regular offerings. Showing great devotion will grant campaign bonuses to represent your people believing the gods are on their side. But neglecting temples or skimping on the sacrifices can lead to penalties instead, as the people come to feel you have lost the favor of the Olympians.

A Total War Saga: Troy will launch exclusively on the Epic Games Store on August 13, and will be free to keep if you download it in the first 24 hours.

T.J. Hafer is a contributor to IGN. Talk strategy games and/or history with him on Twitter at @AsaTJ. 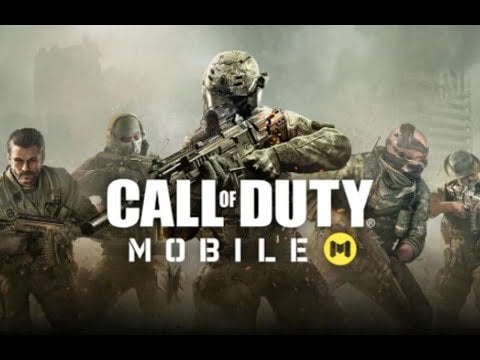 A Search for Better Convex Decomposition