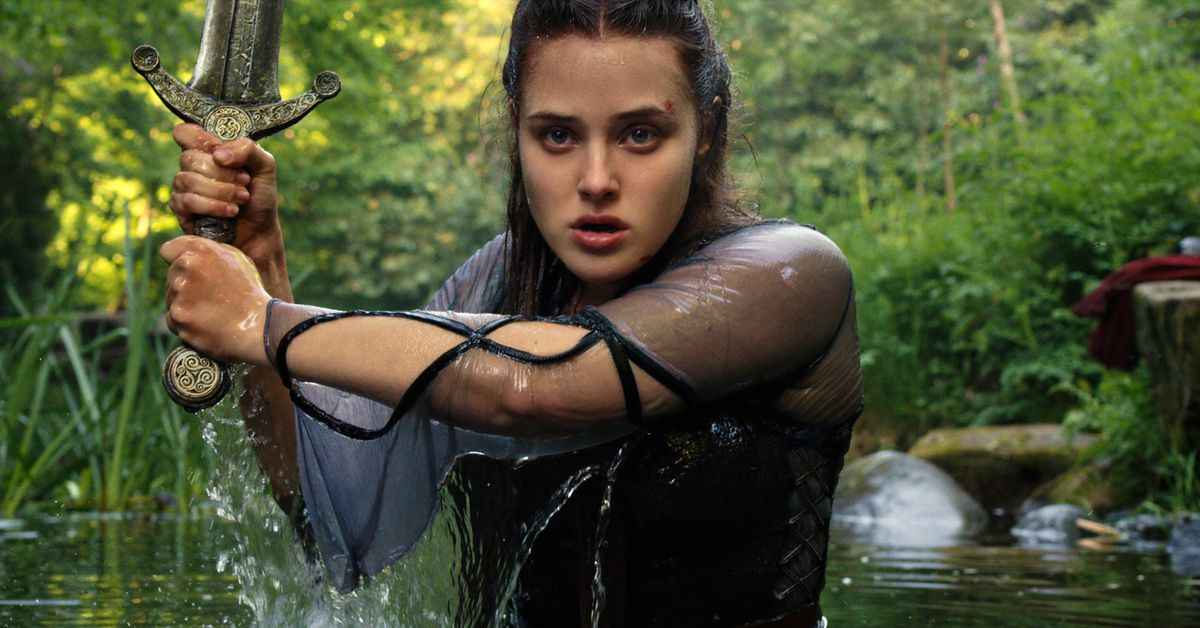 
In the wake of Game of Thrones, Netflix has led the charge for new televised fantasy epics, with shows like The Witcher, The Dark Crystal, and The Letter for the King amongst their original productions. Next in line is Cursed, a reimagining of Arthurian legend based on a book by TV writer Tom Wheeler and comics writer and illustrator Frank Miller. The new focus of the old legend is Nimue, The Lady of the Lake, who in the original tales gifted King Arthur with the magic sword Excalibur. In Cursed, she’s the one destined to wield the sword.

During a visit to the UK set of Cursed, Katherine Langford (13 Reasons Why) admitted her knowledge of the Arthurian myth was limited, with some exceptions. “I definitely saw [the 2008 BBC series] Merlin when I was younger growing up here, so that was my only real point of understanding the King Arthur legends,” she said during some downtime from shooting. But that relative unfamiliarity, and the physical demand of re-inventing a 1,000-year-old story, were the reasons the actress wanted to dive in. “This is the first fantasy audition that I ever got, and so I was really excited. Also it’s the first role I’ve ever had that required a physical component. There’s horse riding, sword fighting, running through things set on fire — it’s been a really different kind of process.”

For Langford, Cursed’s significant twist was in centralizing the women often glossed over even in modern updates of Arthurian myth. The actress saw the value in seeing this kind of interpretation, saying, “I’ve heard of the Lady of the Lake and I’ve seen beautiful artwork of her, but there wasn’t a whole lot of information out there about her — we know the hero’s journey but we’re not so well-versed in the story of the heroine. And I think what makes it applicable now is that you’re getting to see the challenges that she specifically would face.”

As well as with this subversion of the classic tale, the show looks to differentiate itself through production design. Langford praised Marianne Agertoft, the head of costume on Cursed, for “creating the most incredible costume pieces,” and Erika Ökvist, who gave the show an identity through hair, makeup, and prosthetics. “They’re really making this a world that feels unique and otherworldly.”

The very functionality of clothing was important for practical use, and also for achieving the vision of Nimue. “Back in the Middle Ages, there were so many things that prevented women from becoming these heroines,” Langford said. “Something as basic as their clothes, the foundation of what you wear everyday. [Nimue] changes her look as we go throughout the series because of design but also for functionality, because when I first tried to get on a horse at the beginning of the season, I was wearing a dress and when I went to get on the saddle, I physically couldn’t get on.”

Not to mention aesthetic appeal as well: “She starts off in what I would say is a glamorous potato sack. She starts off as a medieval nun, so it’s just like a giant sack that itches all day long. And then she has a transformation … standard medieval stuff but dope.”

Langford takes a beat before elaborating, “She’s got some leather chaps that are pretty sick. I might steal them.”

Cursed premieres on Netflix on July 17